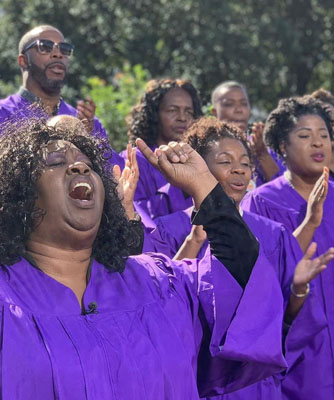 The mass choir of Greater St. Stephens Full Gospel Baptist Church is acknowledged to be one of the best in the nation, having won the coveted Stellar Award as Best Mass Choir of 1995. Nothing less could be expected from a church organization with the motto “Striving for Excellence,” and pastored by the great Bishop Paul S. Morton Sr. The visionary and revolutionary bishop is pastor of the 20,000-member church in New Orleans, and the founder of the Full Gospel Movement which has spread around the world in less than a decade. It envisions using the full gifts of the Holy Spirit as promised to seekers in the Bible. Anyone hearing Bishop Morton, who is the executive producer of the GSS Mass Choir’s CDs and often leads the choir in song, can tell that a greater power than his own is working through him. The mass choir is magnificent when its combined voices sing. It is also deep in soloists, and is backed by outstanding musicians.

No less than the late, great Danny Barker, the revered jazz musician and historian in New Orleans, opined that the best music in the city in contemporary times is to be found in the black gospel churches. On Sundays, the GSS Mass Choir proves the truth of that statement. Working from the principle that “the message is in the music,” and that one never knows what might reach a particular soul, the choir’s repertoire is diverse, including traditional and contemporary compositions. Many pieces are composed by members of the Music Ministry, such as choir director Philip Britton; Michael Robinson, the church’s talented pianist; Paul S. Morton Jr., son of the bishop; and Elder Debra B. Morton, co-pastor of the church. Songs of deceptive simplicity, such as the younger Morton’s “Let Him In,” heard on the GSS Mass Choir’s 1999 As for Me & My House CD, have the ability to reach across race and nationality to the members and visitors alike who jam the church’s services.

Some of the choir’s best work is in these heartfelt invitational songs. Britton’s “We Offer Christ to You” on the 1993 CD of the same name was a national hit on the gospel charts. Robinson penned the inspirational “Are You Ready to Change?,” that has brought many running to the altar to be saved. Recognizing that to God belongs the glory, choir members are ready to sing His praises in powerful unison with songs such “Jesus Is the Light of the World,” or as backup for Bishop Morton’s popular renditions of “Your Tears” and “God’s Got Those Healing Hands,” the title cut on the choir’s 1991 CD.

The GSS Mass Choir continues to minister in song to people all over the world as the 21st century unfolds, in what the church calls “these last and evil days.” ~ Rose of Sharon Witmer